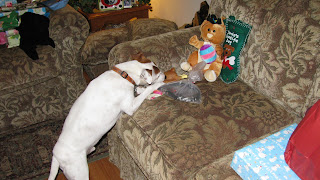 Ending this year on a humorous note!Heres my dog frasier stealing his gifts on christmas day before he was allowed to open them!
Posted by Frasypoo at 11:38 AM 1 comment:

The end of a decade

There have been questions about 2010 being the end or the start of a decade.I think I will go with it being the end of a decade mainly because its my blog and what I say goes !!
I do a review of my year around this time and as I look back I am happy with the way things went.Reached two goals.Ran a marathon and learnt how to drive.I have to say that the marathon was far easier than the learning how to drive goal!
I have been in great health and so has my husband and next year we are going to focus on being better.I gained weight training for the marathon and have manage to lose most of that weight this year.
Its a bit scary standing here looking out over a blank canvas -the new year but God is good and with me all the way so bring it on!
Posted by Frasypoo at 11:34 AM No comments:

I think I finally have a hold on Christmas this year!
Have most of my gifts wrapped and ready to go.Working on Christmas cards.Have my tree up
Finally!

The only reason I am able to do so is because my mom is here and I dont have much to do in terms of housework!
Posted by Frasypoo at 11:00 AM 3 comments:

Is it me or is everyone just sick of the political ads on TV.I find that every person attacks their opponent rather than use the ad as a platform to say what they plan on doing.

Though it seems like empty promises flow when any promises are made.

GA seems to be having some very tight races.The governors race is  pretty tight.Our local congressman is pretty useless so I would love to see him go!But the Republican candidate is very new to politics so not sure if he is a good candidate!

Its been a while since I blogged and have forgotten how cathartic it is!
My latest gripe is the local politics.Our elections are coming up in July.
Two years ago,we had a bunch of crooks running the show.And yes,I literally mean that.The DA's husband was the county comissioner and their best friend was the sheriff.Together they ruined the county I live in.The DA had so many cases on backlog it was not even funny.The sherriff went around giving every single one of his friends a badge,fired all the white cops(they sued him for that),gang related crimes increased etc.They were all voted out of office,mostly in run offs and things had limped back to normalcy since then.Last heard the DA and her husband ran a law firm and the sherriff was sued for all the firings and lost.He declared bankruptcy and went to work as a car salesman.
Well,this time around they are all running for office.
Sad part is,if people dont go and vote these idiots will win
Posted by Frasypoo at 2:54 PM 4 comments:

This weekend hubby and I celebrate 8 years of wedded bliss.
We joke about it being 8 years of extreme torture!But the years have just flown by.

Most of you know we met online and got married 4 days after we first met.Most people thought it would not last but it has!
Sure we have our ups and downs but at the end of the day we can truly say that we are happy.
Hubby says our marriage succeeds because of my compromise!The truth is every marriage survives because of compromises made.
I dont really understand when he talks about Twin Cam and Brake pads and I'm sure he does not care what my mileage per week was or my running stats for last year was!
But I do care when the bike is working in perfect order so that I can ride on the back without any worries!
I've been blessed...
Posted by Frasypoo at 12:34 PM 12 comments:

Where have I been?

It may be time to get serious about blogging again!
Though most of you are my friends on FB and probably know me too well by now!
I am seriously training for my marathon and its not been easy.If I dont finish a scheduled run,I get depressed.
My whole life is governed by the weather.
As in....will it rain on Friday...day of my long run...if it does ,then does that mean I get to do a treadmill workout which I do not look forward to!
Longing for the days when I ran only because I wanted to and not because I have to.
On that note,I have dropped 2 lbs since I started training so that tells you a lot about how much I eat!
Posted by Frasypoo at 7:01 PM 10 comments:

Cant believe that the last time I posted was May 23rd!!!

When I got over mom going back home,I decided to visit home for a month and spend time with my grandma who was sick.I did not want to look back and have any regrets.

I had a great visit.Also got to spend some time with my new sister-in-law (well about a year and a half old).

But I'm back and dont plan on getting on a plane in a while!!!
Posted by Frasypoo at 8:58 AM 5 comments:

Mom is leaving next week so I am trying hard to take her to do stuff that we were not able to do so far.
I will be in a deep depression so please pray for me.I am not sure if I remember how to clean etc!

We went to Vidalia last month and had a great time.We got to bring back tons(about 100 lbs each) of Vidalia onions(per person)
We went to an onion sorting/labelling place and was shown how all that was done and the farmer was kind enough to let us burrow thro his reject pile of onions.The grocery store had rejected his truck load of onions because the Texas onions were in the stores and the Vidalia onions were not yet needed.Not a thing wrong with the onions but he could not do anything with them and was going to throw it in the fields and plough it in.
Also visited the Onion festival there,was neat.My favorite part was the Tumi store that is open to the public at this time of year and I got a $495.00 bag for $40 bucks!

One of the tub of onions that we went thro 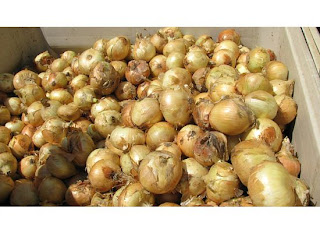 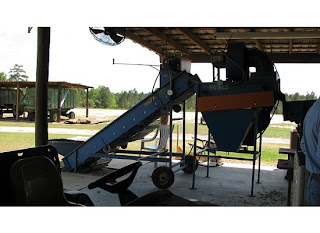 An onion field that has been picked...yes,Picked ! 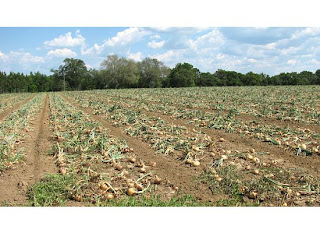 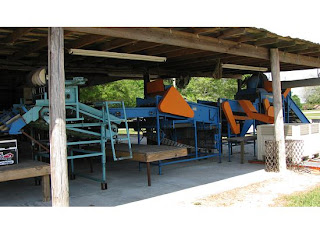 One of the smaller onions 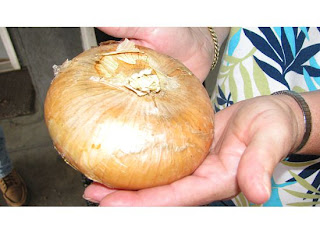 My garden is coming along great.My beanplants have flowers and so do the tomatoes.It may have needed more sunshine and is slow on fruitition part!
I put in cabbages too(from Vidalia,30 plants for 3 bucks).Also Cilantro,basil and oregano
The worst part is the bugs around them.Have to keep dusting it and then worry about all that pesticide!
Of course Frasier has done his utmost to stand in the middle of the vegetables and ponder.
In the front yard,the deer ate all the new growth on the apple trees and all my hosta and lilys.
Any takers for some venison?

How fast does time fly when you are busy ?
I cant attest to the fact that I am busy as my facebook friends know I spend a lot of time there!
Maybe I can blame FB for a lack in posting!

I have been doing great.We extended moms tickets so she will be going back at the end of May.I think she is morbidly homesick now !
I am in running competitions with strangers on Nike+ challenges.Everybody thinks its funny!I am in an Indian Challenge which is most miles in 2009.Its for Indian runners from all over the world.I am competing with people who are not Indians(I suspect one is Canadian and the other is Dutch),cant do anything but kick their butts in competition

Easter was great.We ate out on the back porch since the weather was so pretty.Its amazing how this weather has not changed as it usually does.It goes into summer heat as soon as April hits but not this year.I have my little vegetable garden all planted and look forward to beans and cucumbers and two types of tomatoes.As long as my dog does not pee on the plants!
Posted by Frasypoo at 3:14 PM 16 comments:

Frasypoo
This blog is a journal of sorts, of my life as I live it.I am a Christian,a Republican,a wife,a Runner,a dog lover,loves riding with her husband on the back of his Harley and a fan of all things vintage...so expect to hear a lot about all that!Especially the Political part. I'm a Southern peach by way of India and somewhat of a rarity because I' m Republican!

I also blog on